The Two That Got Away

Duby and I went out to the same old spot at Banner Marsh in search of bass, what we caught were a couple "one that got away" stories. Here they are, believe them if you want.

I was finesse fishing a 5" rubber worm up near the bank when the line got heavy. I mean HEAVY. It didn't take long to get the beast close to the boat, and I realized I had a musky hooked. We fumbled around in my tiny boat trying to get my tiny bass net around the fish - no luck. Then in a split second, the line got light and I watched it swim away with my lure hanging from it's mouth.

Later that day, Duby hooked into another musky. After our experience with the first one, I wasted no time reaching down and grabbing it by the gills. I pulled it up, we admired it a few seconds and we began making arrangements for a picture. I handed him the fish and what happened next was a true tragedy. The fish squirmed and Duby dropped it. One bounce off the boat and splash! Based on what we could remember from when I was holding the fish we believe it was 40-42". We did take a picture after it was all over, you can still see the splash marks on his shirt. The poor guy boated a nice musky and had no proof other than a cut on his finger. 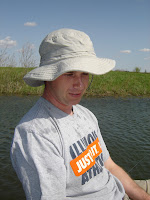 All in all it was a great day. We hooked into two muskies, and even had one in the boat. All the while we were looking to catch some bass; I know plenty of musky angler's would would love a day like that.
Posted by Clif at 6:23 PM No comments: Links to this post

A buddy and I went to Banner Marsh in April 2007 and he caught this pre-spawn female. My notes say she was 18.5" and 3lb and looking at that belly I'd say my notes are right. Looks like she's got a pretty good gash in on side. 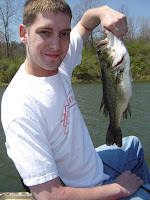 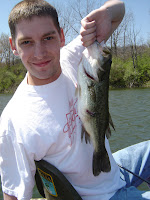 Posted by Clif at 6:17 PM No comments: Links to this post

I had been to Banner Marsh three times starting in March of 2007 and was blanked every day. Adding to the frustration, buffalo gnats had hatched and were eating me alive (bug spray didn't work). Then on the forth trip of the year I finally got on the scoreboard with this beauty. I normally don't take pictures of small fish, but I was so excited to finally have some luck. 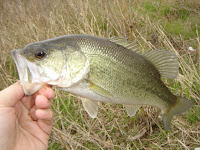 Posted by Clif at 5:41 PM No comments: Links to this post