My inlaws gave me an untra-light rod and reel for my birthday back in October, so naturally one of my plans for this year is to catch more crappie. I went to Banner Marsh today and apparently I have a thing or two to learn about crappie fishing.

After I lost a spinner-tail grub to a tree bass, I tied on a small chatterbait I had. I hooked into a crappie right next to shore and he untied my knot for me. So I tied on another spinner-tail and again had my not untied. I figured there must be a different knot for 4 lb test that I was unaware of so I tied a super knot on the next 1/16 ounce spinner-tail and bam! I hooked into a musky. I can tell you I was completely shocked and had no idea how to fight a musky on 4lb test and an untra-light rod. Through some quick work on the drag nob and patience I pulled the thing within 4 feet of shore and I got a good look. He wasn't big, but he was a musky and I needed to find a way to get it all the way in. It's difficult to convince a fish that big to come up on shore, there was no chance I was going to pull it up with brut force so I fought it near shore for a while hoping to wear it out and he finally cut the line. So if you catch a Banner Marsh musky with a crappie jig in it's mouth, I'd appreciate getting it back.

After that I started crappie fishing with my bass pole (medium action with 8 lb test) and the change in poles gave me a change in fish. I finally landed my first official fish of 2008 in the form of this fine specimen on a spinner-tail grub: 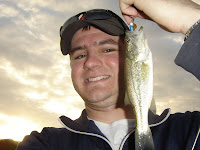 I also caught a more respectably sized bass a little later again on a crappie jig. This one wouldn't normally be picture worthy, but seeing as I finally had some luck here it is. It was 12-14" long. 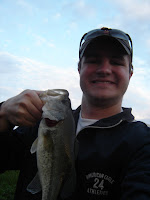