Co-workers and I went up to Lake Delavan, Wi in the end of June for our second annual toothless beaver fishing trip. We all had a good time. We started out Friday with a tailgate at Miller Park before going into the game. After that it was all fishing, drinking and boccie ball - in that order. Over all the fishing was just good enough to keep us excited, but we didn't catch any trophies. The closest we came was Scott's 18 incher. The crappie didn't cooperate like they did last year and were spotty with only a few nice ones. This year we had two boats again, and I only have pictures from the one I was on. 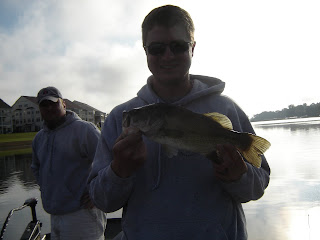 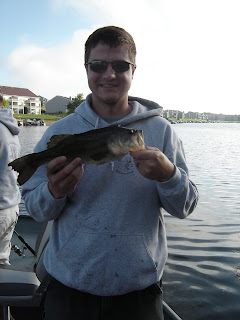 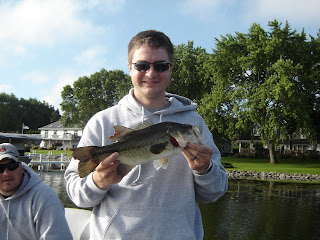 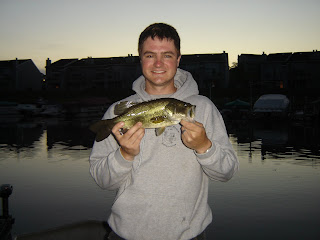 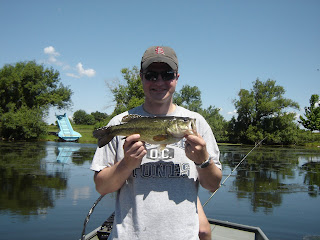 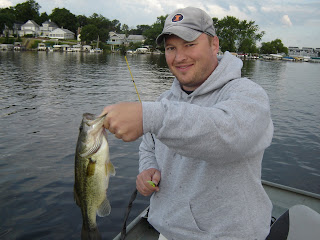 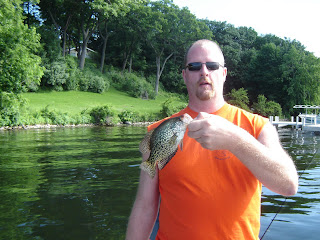 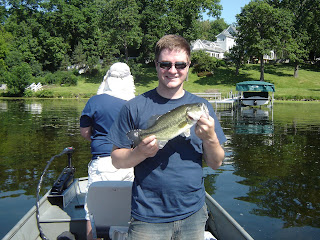 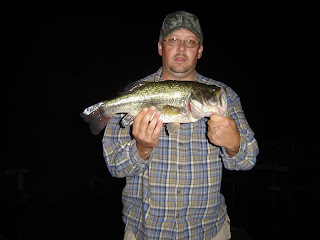 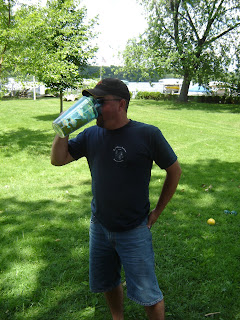 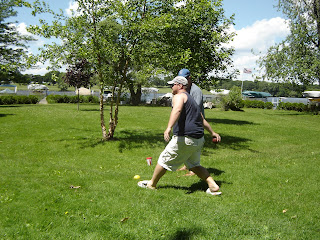 Posted by Clif at 1:51 PM No comments: Links to this post 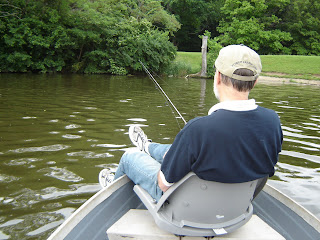 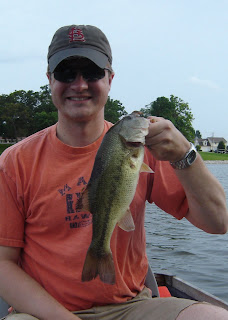 Posted by Clif at 7:32 PM No comments: Links to this post 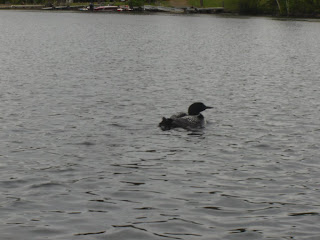 My wife, her parents and I went up to the Hayward, WI area in the first week of June. We stayed at Deerfoot Lodge on the Chippewa Flowage. My father in law and I spent a lot of time fishing starting Saturday the 31st and ending Wednesday morning. Sorry it's taken me so long to get these pictures up, but here they are...


The lake has a good mix of largemouth and smallmouth bass. We ended up catching mostly smallies, with a few smaller bucketmouths mixed in. The first one you see is a 16 incher I caught while out with the wife. 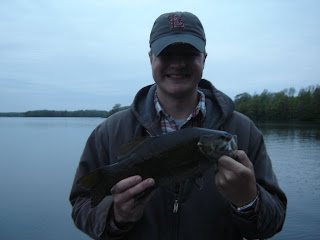 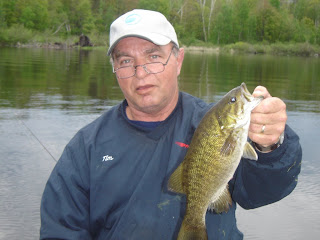 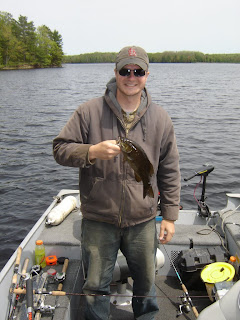 One night we got lucky and got into a bed of crappie. In all we boated 27 crappies and had to quit when we ran out of minnows. The next morning (after an overnight rain) we went to the same spot and they had moved on. My father in law caught the two largest crappies, shown below: 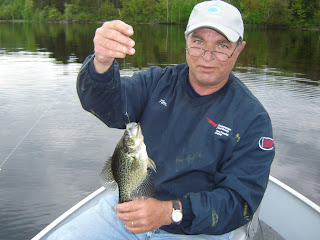 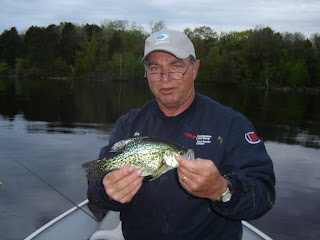 Walleye fishing was said to be spectacular, but with the exception of a few small ones while crappie fishing and the 14 incher shown below, we didn't have much luck in that area.

My wife went out with me on Sunday, we didn't catch much before she lost interest. However, she caught her first northern ever on a crank bait. Can you tell how excited she is to be holding it? She insisted on not touching it, so we had to use the scale for the picture. 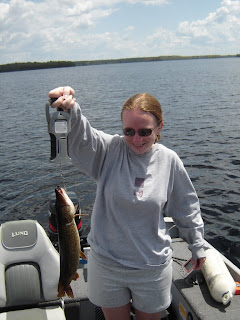 Now for the good stuff. As you may know, Chippewa Flowage is home to the [former] world record muskie, caught by Louie Spray. So of course, the prospect of catching muskies kept me anxious for weeks prior to the trip. Less than 2 hours into the trip, I hooked into this one while fishing a Senko near shore for bass. This marks the second time I've boated a muskie with a Senko, and the 5th or 6th time I've had one hooked with a Senko. I'm starting to think they like Senkos as much as bass. This one was 38" and weighed just over 13lb. 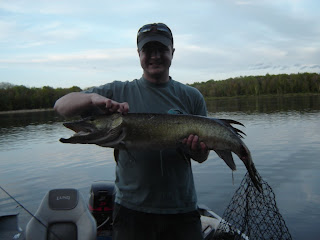 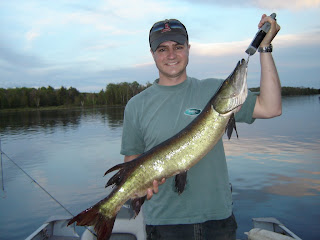 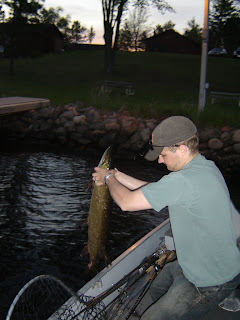 Two days later, my father in law and I decided to devote some serious time to muskies. We fished a weed bed for hours before he hooked into a much larger one, shown below. It measured 44.75" and weighed in at almost 24lb. 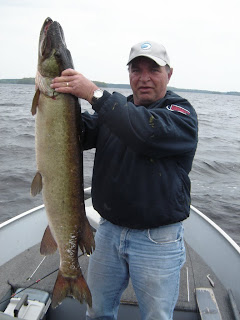 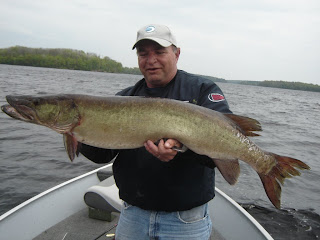 Our resort had a muskie chart at the bar. Here it is with both our fish listed. The red box around my father in law's means it's over 40". The resort owner was surprised when I caught mine and apparently doubly surprised when we put the second one on the list. He mentioned something about "lucky bastards" good naturedly during conversation. 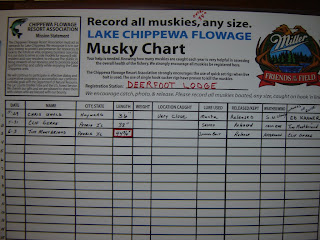 And finally, I wouldn't normally post a picture like this except for the fact that you should know something about it. I caught the following pike and wasn't sure what to do. Should I throw it back? Should I throw it on shore? Should I bring it back to the resort and ask? Well we decided to toss it back. Later I learned this fish has a tumor caused by a virus that can be transfered between fish with contact (spawning). The Wisconsin DNR is asking fishermen to throw these fish on shore to help slow the spread of this virus. Sorry about posting gross pictures but the word should get out. 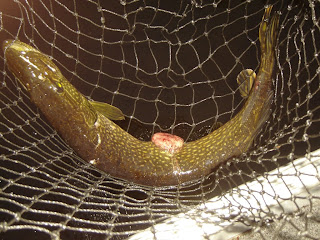 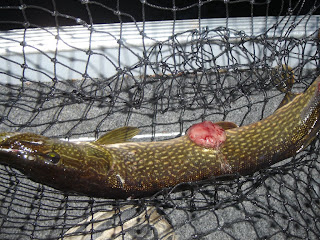