He’s got a big boat and everybody knows his name

I recently read an article about BASS founder Ray Scott endorsing the X10 from Carolina Electric Boats. In fact here he is showing off his best endorse... 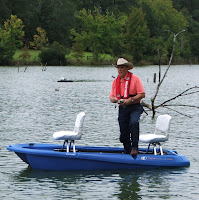 According to the article the boat has a shallow draw that allows it in as little as six inches of water. It apparently has two props powered by two electric motors, allowing for maneuvering in tight spaces. Also the props are recessed, limiting chances for prop damage. If all the fanciness sounds good to you, be ready fork over about $2300. But remember, for under $600 you can a new two man bass boat and motor. Keep your eyes on the classifieds and you can get one on the cheap, and that’s something a little more my speed. 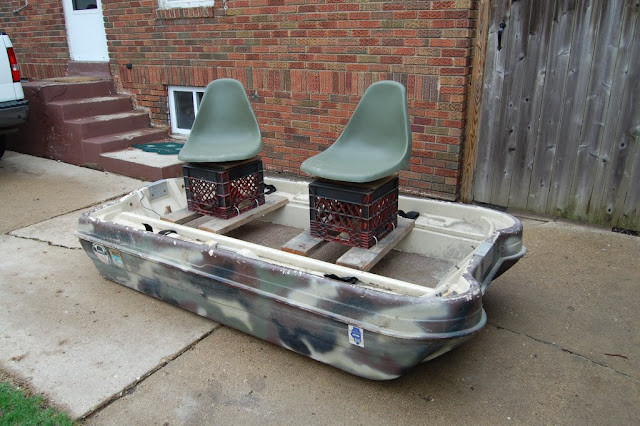 The boat above was my first, The Good Ship Clif and it had what I like to call character. It was fiberglass, camo painted, came with Skoal Bandit stickers and measured just under 8’ long. I picked it up from a coworker for $75; the deal included a 27lb thrust and dead bloated battery. During that boat’s early days it spent a brief period flipping through the air over an interstate. Sadly the subsequent brief period inflicted severe damage. My coworker got it, patched it with fiberglass and fished it through the ‘90s. His kids started demanding time, as kids are known to do, so the boat sat for a few years before I got it in ’05.

Just like the X10, it was small enough to get into some pretty tight spots. However it had some draw backs. It was small so space for tackle was at a premium. It claimed a 375lb weight limit, something I had a total lack of respect for. The extra weight caused the boat to be a little “tippy,” so movement needed to be coordinated. If I leaned forward for a fish, my partner had to lean back. No ramps were required, but it was heavy and unwieldy. Sadly, The Good Ship Clif was retired due to mechanical disrepair. The fiberglass patch jobs were starting to fail and water was slowly filling the hull making one pontoon heavier than the other which made it even more tippy. 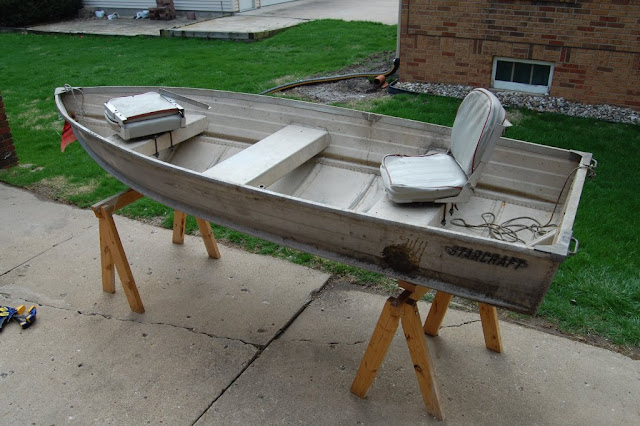 Next was an even trade with another coworker for my current boat. It’s an 11’ aluminum and came with some dents, some slow leaks and no title. Add JB Weld and a coat of Herculiner and it is now leak free, plus I won the battle against red tape required to get a new title. The new boat is lighter, more spacious and also rides high in the water. However, it is also a little unstable, in a different more comfortable kind of way.

You’re probably wishing I would get to the point. I’m not sure I have a point, but if I do it’s this: I’m a fan of small boats and prefer them over larger ones. Don’t get me wrong, I enjoy having space available to get some jogging in, but I’d rather have something a little more nimble. It gets me on the water, and usually keeps me dry.
Posted by Clif at 11:18 AM

Email ThisBlogThis!Share to TwitterShare to FacebookShare to Pinterest
Tags: Boat