Today I made a run down to Spring Lake today after my afternoon at the dentist. I was hoping to see open water, but upon arrival I discovered ice. It was barely hanging in there and breaking up, but ice none the less. I decided that I had driven 45 minutes so I might as well fish a little, even if the conditions were not great. In pike hole I found plenty of open water, so I threw my first cast around 4:15. I fished until seven and didn't catch a thing. But I did learn one lesson regarding my previously alluded to experiment. 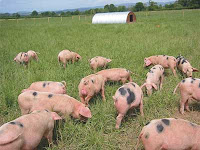 When throwing a heavy (well by fly fishing standards) jig and pig it pays to keep some slack at hand. During a false cast, when the weight of the jig reaches the end of the leader you can say bu-bye to your jig and hullo to free range pork. I think a lighter jig would solve the problem, but I had already tied the lightest one in the box. The solution was to let the line loose just before impact and load my rod by tightening down at the perfect moment. Soon I'll be tying my own jigfly and trying again, Ehler's J-Pig is looking pretty good.

After I gave up on that idea, I proceeded to decorate the trees with a couple more flies before turning to my spinning rig just before dusk. I can throw jigs a mile with my Shimano and I did that...until something crawling around in the dark forest spooked me to my truck. My little oinker grew up so fast.
Posted by Clif at 9:25 PM