Can it shread personal documents too?

The weather man said rain would arrive sometime between 11:00 and noon. I didn't let that scare me and went to Banner Marsh to squeeze in a few hours, luckily our weather man is a doofus and I never felt a drop during 4 hours of fishing. I got in the water about 10am and waded up and down the reeds looking for bass. I caught a small one using a purple/yellow Clouser Mad Tom. Upon returning to the starting point I took a piss, tied on an orange/black mad tom and started the circuit over again. This time I found this: 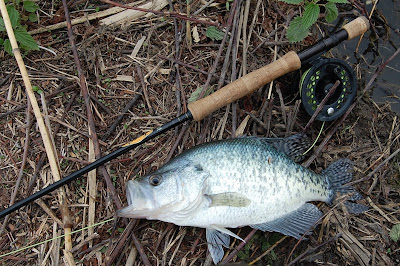 The 14 inch beauty went 1 lb-10 oz (on my reliable digital scale). The fight was an interesting one. While I was busy trying to reel in the slack fly line, this fish swam right at me and bumped into my right knee twice. I wasn't fast enough to net it before it swam about ten feet away then came right back at me. The second time I was ready and the result was a tie for my personal best crappie. This one was caught on a 4/0 Clouser Madtom (yeah I know that's a big ass hook) while I was fishing for bass in 3ft of water. The last one was also 14" and came out of 14ft of water on a minnow.

Also, now for an official update. In my previous post I talked about how my mechanical scale is unreliable. I knew this because when I bought the digital scale all my fish got a pound heavier. Last night I hooked the mechanical scale to my digital scale and pulled it to the same point the fat largemouth pulled it. It was hard for me to read both scales at once so I did this five times and I can now officially say Wednesday's fish weighed 3.8 pounds. Not quite 4 like Dave and I thought, but at least this will stop the debates/arguments that have ensued the last two days at work. I would also like to point out that I was right about my mechanical scale being wrong, it read 3lb for the same force that put my digital at 3.8lb. And yes, I'm ignoring the possibility the digital is wrong for obvious reasons.
Posted by Clif at 5:08 PM