It's something I've been thinking about more and more lately. The likelihood of catching big fish is greater on private waters. I've been considering joining a club for a couple years now, and I recently saw something that gave me the kick I needed to do it. I'll see how this year goes before I sign up again next spring. My new club consists of a few strip pit lakes (the long skinny kind.)

Saturday Scott and I hit one of the lakes with high hopes. We spent a long time looking for bass, with a little success. No lunkers, but Scott did catch a nice one using a black/blue jig 'n pig. A little later I landed one on a minnow under a bobber. We totaled five bass, with all the bass being caught in fairly shallow water. We were unable to convince any bass to bite in deep water. 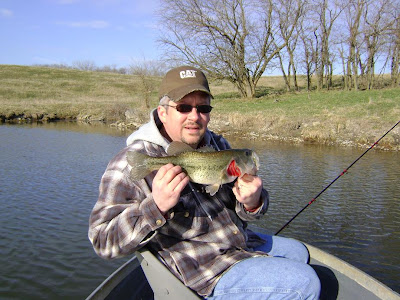 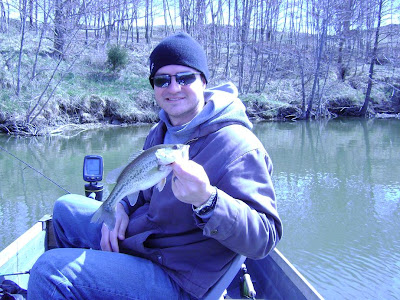 My first bass of the day was hungry. He hit my crappie minnow despite the fact he was struggling to hold onto his last meal. It looked like a blue gill, but I couldn't see well enough and a review of the photographic evidence is inconclusive. 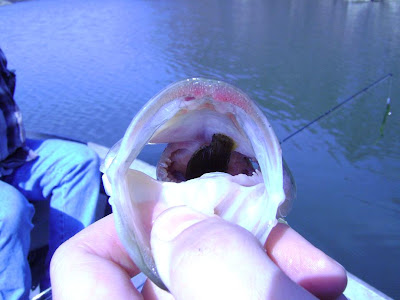 Most of the time we bass fished, I was pulling a crappie minnow behind the boat with limited success. By the time we called it quits on the bass I had also caught two crappies and a blue gill. With the bass bite being slow we changed the game plan and focused on the crappies. They were pretty active and cruising in schools. In a couple hours we had boated twenty more crappies, including the nice ten incher Scott is showing off below. 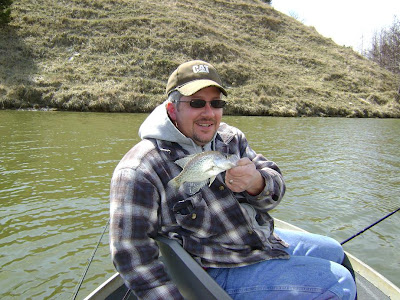 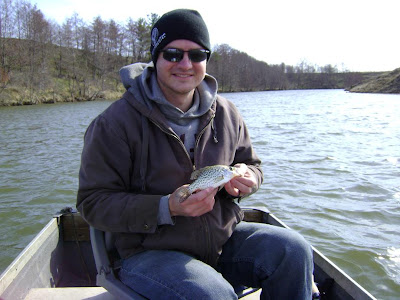 All in all, my first time fishing this club was a pretty good. The bass bite was slow as expected for this early in the year and the crappie bite was good, as it should be. I was seeing lots of fish on the sonar, so I'm interested how this lake will fish in a month or so. Also, I was able to get a somewhat incomplete idea of the structure of this lake, and I found a few spots to check out as the weather warms.