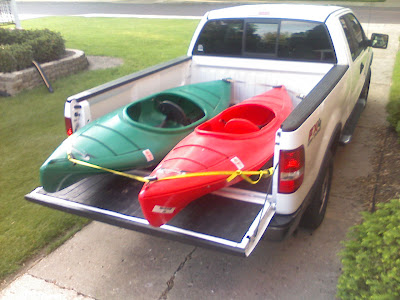 Tomorrow, Dave and I are going to try kayak fishing. Special thanks to John who loaned us the yaks, making me promise to take him kayak fishing if it works out. John likes to fish and owns kayaks, but he's never done both - go figure! Think of this as a test drive, Dave's been wanting a kayak for some time but isn't willing to commit without some practice. I suspect as long as he doesn't get wet tomorrow, we can expect a new kayak to show in his garage.

In anticipation of tomorrows "strictly fly fishing" trip, I tied some flies, including a leech pattern I made up. I haven't gone looking to see if there is already something out there...

Don't tell Dave, but I'll be bringing my spinning rod as a backup.
Posted by Clif at 10:07 PM