But the girth left something to be desired

That's what she said!

The last time I fished the bagel, rain chased us off and I felt like I hadn't really learned anything about it other than fish like the water rushing out of the culvert. So my father-in-law and I went out on the bagel this evening to get a better look and we learned the stumps hold fish. The trip was pretty good despite the humidity and temperature being high. But it wasn't as high as it will be in August, so things were bearable. A couple days worth of thunderstorms had slowed the bite, but we still did pretty good. Plus we got to see two muskrats either fighting or flirting - they whirled and they twirled and they tangoed. 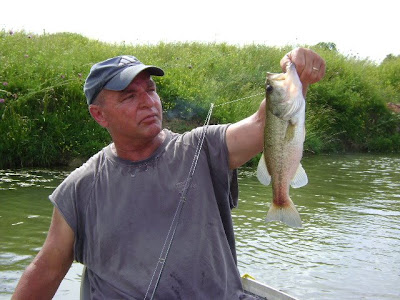 The father-in-law ended up with three bass and three crappie. I focused on bass and tallied six, while letting three others off boat side. Most bass were small, so after catching a 2 pounder I decided we'd better get a picture because it might not get much better. On the next cast, this happened: 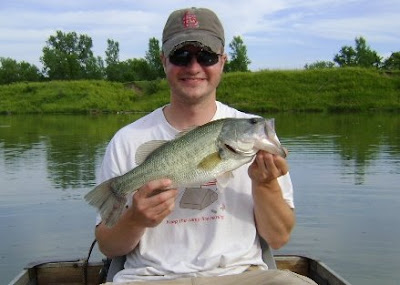 This anemic bass was 20 inches long, but weighed a measly 3.8 lb. According to this handy chart, a 20 incher should weigh about 4.5 lb. That puts this fish at 84% relative weight. Why don't you get on that Nate? Regardless of the weight, this fish was a beauty and got me all excited.

Of note, today I was not prepared to fish like a gentleman. While I remembered the sandwiches and the cold beer, I forgot water. Maybe some discomfort is the secret to big fish...
Posted by Clif at 10:11 PM