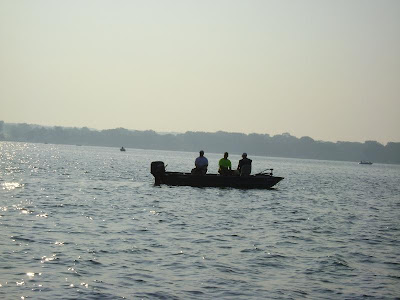 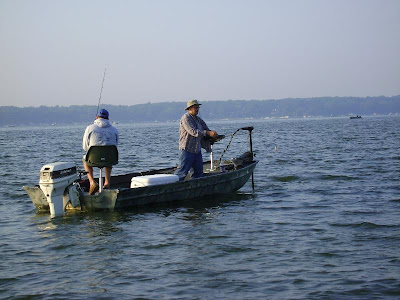 Year one saw plenty of fishing, some serious drinking and we dabbled in mixed martial arts. Last year the ultimate fighting moved to I-43 at seventy miles per hour. This year we avoided the interstate but tossed in a bar crawl and a Clampett boat (partially seen below). 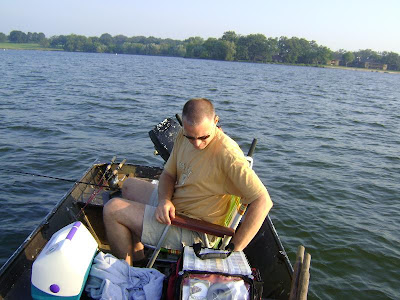 Here you'll see six dudes on a mission. This is after stop number one of nine in the crawl. As the night wore on, rounding up the troops proved more and more difficult. 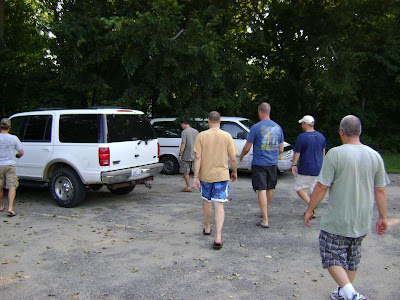 I've noticed a trend. As debauchery increases, the fishing quality has seemed to decline. Fishing quality has seen a steady decline since the beginning. This year was pretty crappy, however, I do have some proof we wetted lines. In a true Cinderella story Dave managed to boat the two best fish of the weekend. Beyond the four and three pounders shown below, the group managed a handful of small fish. I had some nice (but tiny) success with walleye thanks to a hot tip from Don. Scott didn't bother catching a fish all weekend. 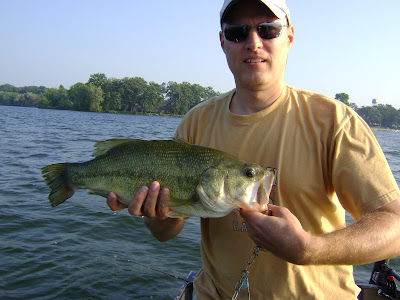 Dave's two bass were the only keeper bass we found. Both came on a Berkley Shaky Head worm fished on the weed line in twelve feet of water. Dave and I are the only two who devoted serious time to fishing the edge, with the others looking shallower. All fish found shallower were in the 1-2 lb range, while Dave boated these two and I lost a similar sized fish in the same location. 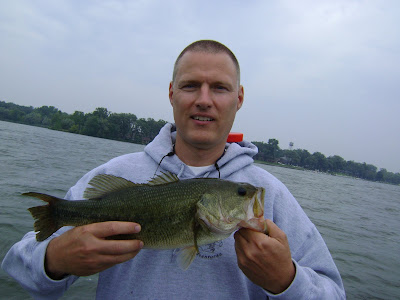 Odds on the boat started strong but faded quickly. Despite our best plans, the best chance of making a widow came as a complete surprise. While tying off the boat, Todd pushed the dock to the limit and quickly found himself (and cell phone) chest deep in water. Initial reactions were serious, he was in pain. Later we found out he nearly lost a nipple on the fall, but sustained mostly superficial injuries. A shorter person would have likely taken it worse, and who knows how the elderly would have handled a similar experience. Looking back, we're laughing about it and are happy the dock failed under the guy mostly likely to survive. 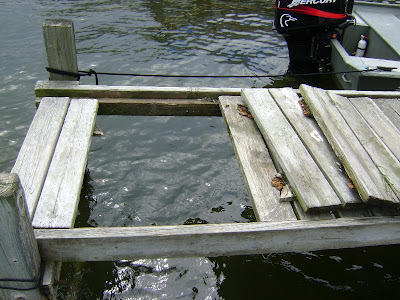 In between all the slow fishing, we did find a few hours to "line the rail" and play yard games - the perfect cure for slow fishing and sore nipples. What you see below is as much of the rail as my camera could capture, it's about half. Keep in mind this is half the total of one day's drinking by five toothless beavers. I'll save you the trouble of counting, there are a little more than fifty bottles shown below. 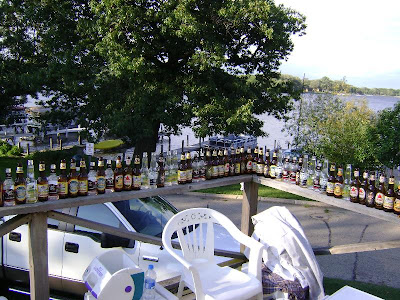 Next up: the new found world of larvae
Posted by Clif at 6:34 PM