Cold, windy and full of feathers. 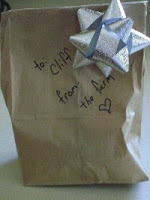 On Christmas morning, a suspicious package sat under the tree. The writing indicated it was for some guy named Cliff.  Seeing as I was the closest thing there was in the room to a Cliff, I picked it up.  From the farm...apparently with love....light enough to be an empty bag....hmmm.  My first thoughts was this had to be some sort of gag.  After looking into the bag, it became clear it wasn't a gag and was indeed sent with love.  My sister-in-law had the good idea of collecting some chicken and guinea feathers - she claims no birds were wrestled in the process.  I'm not sure how she thought of it, but I'm glad she did.  Hopefully by next Christmas, those birds will have provided some more - I really like the guinea feathers (hint hint) 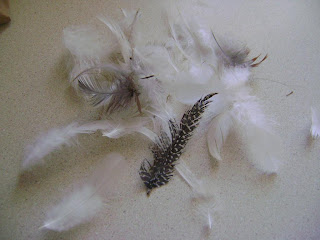 I didn't realize it at the time, but this Christmas was going to turn into a great feather gathering time. A few days later, I found myself shooting pheasants at Moser's Pheasant Creek near Boonville, Mo.  Moser's offers guided hunts, or bring your own dog and have a go at it on your own.  Seeing as we hunt about once a year and have no dogs, we opted for a guided hunt.  The picture below shows my father and Red the Hungarian Vizsla.  Red was a pretty good dog and it was a pleasure to see him work. 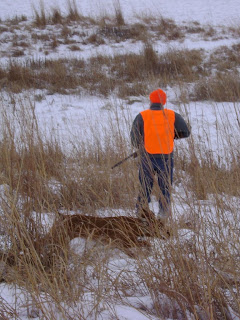 They set out 18 birds for our party in a field I'd guess to be about 15 acres. Red sniffed out 17 of them and we bagged 14.  This was my third time hunting at Moser's and the first time we had good bird hunting weather - cold with snow.  The birds we sitting very tight, only a couple flushed early.  Here's a pic of my father, my uncle, our guide Dakota and a nice view of our well manicured field.  Sometimes I struggle to call this hunting, because it's just so easy.  Easy? Yes. Fun? Absolutely. Hunting? Maybe. 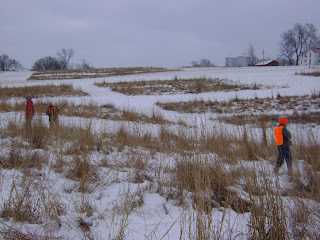 Shortly after that, I found myself cleaning pheasants. A pile of bird carcasses sat before me, and it was difficult to not just bring the whole pile home, a full skin goes for about $10 at Cabelas which would cover a major portion of my hunting costs.  Unfortunately I wouldn't know the first thing about finding a buyer.  Instead I brought home the following assortment for personal use.  I already have plans for the tail and wing feathers...the others look like they'd be good palmering material. 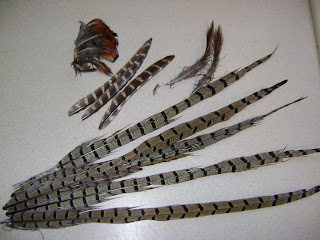