Be my look out, while I do this thing 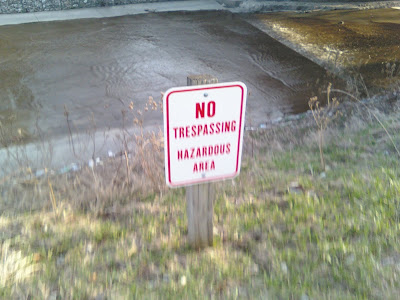 I actually squeaked out of work on time today with a plan to get out.  Halfway home my cell phone rang, and I spent the next hour talking on the phone and rearranging travel plans for next week's business trip.  So much for the head start, but I didn't let it kill the afternoon.  The named intention was to perform some recon on a nearby urban creek I had an eye on.  Intentions left unnamed included a chance to get out, stretch wings, and dust off the long rod.  Upon arrival, I left the rod holstered and set out on a hike to scope out the prospects. 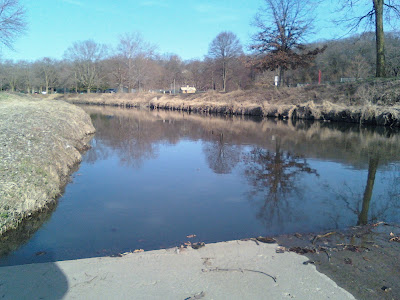 They say first impressions are everything, and my first impression was this particular nameless creek lives up to it's name.  It is fully deserving of all the benefits and entitlements of having no name.  The only signs of life during my trek were two tame geese, who became a bit nervous upon my approach.  Just nervous enough to do that "waddle-away-while-stealing-over-the-shoulder-glances" thing geese do so well. 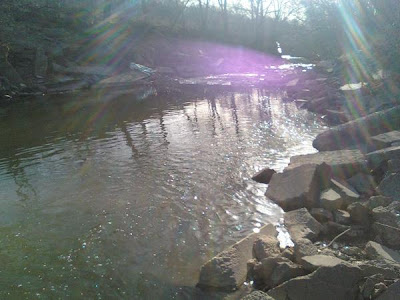 I've decided this creek isn't likely to hold many fish.  I did see a ripple which couldn't, with confidence, be distinguished between a fish rising or a bird crapping.  Being an urban creek, the planners built a series of spillways, presumably to slow erosion.  Couple that with depths of 1-2 feet (one day removed from a rain shower no less) and I'm sure any fish who happen to find themselves swimming between these dams are killed each winter. 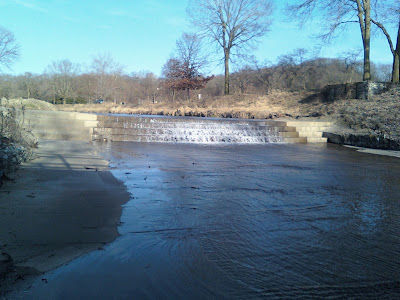 Despite the dim report, I returned to the truck and strung up with an all purpose nymph.  So as to not be spotted entering a "hazardous area," I made hast to the best hole around.  Tucked away under a bridge, I took a my first swings of 2010.  I worked the tiny hole for about 30 minutes and hit the same snag twice, losing a couple flies.  As expected, no fish bit.

One important part of becoming an angling master, is learning where not to fish.  If you ask me which creek, I'll be doing a favor and telling no lie when I say "it has no name."
Posted by Clif at 8:03 PM