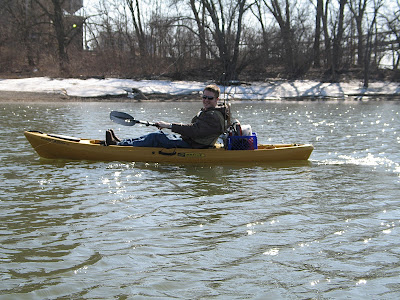 Look at that guy...isn't he happy?

As promised, I took the kayak out on it's maiden voyage yesterday. Our forecast was for 52 degrees, so I made the most of it by finding some open water. Most area lakes are still iced over, but the Illinois River has been open for weeks. The plan for Dave and I was to kayak into a backwater (yes Scotty, it's the one you're thinking) where I've had some luck in the past with sauger. Alas, our best laid plan was not meant to be; upon arriving we found the backwater still frozen. 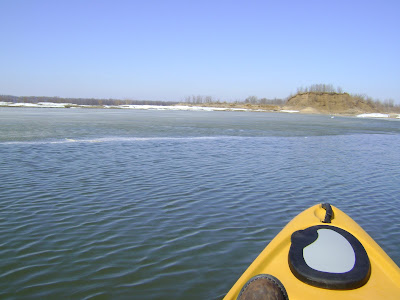 
We fished the main channel, islands, creek mouths, rip rap, parked barges, pilings and bridge piers. The day was a complete fishing bust. Zero fish caught over about four hours of trying. Despite the fishing, it was a great time. We got out and stretched our wings on the first beautiful Saturday of the year, taking in sights along the way. Bald eagles have been making a serious comeback along the Illinois and at one point I could see five different eagles at once, one having juvenile markings. My 3x zoom isn't ideal for taking pictures of eagles and this is the best I could do. 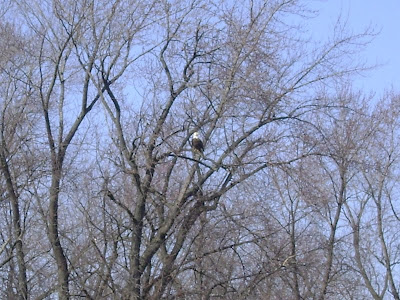 A couple of posts ago, Dave and I were acting foolishly on ice. The Wandering Owl pointed out, via my comment section, that ice often leaves rings on trees. This tree was right next to the river channel and has weathered a few winter floods. You can see a little bit of this year's ice left sticking out to the right, while the highest ring was about 10 feet over head. 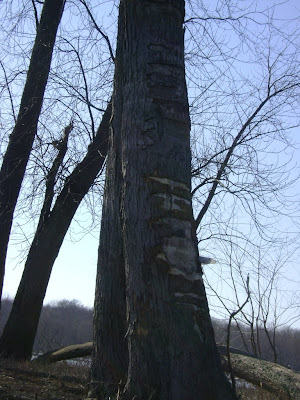 The kayak was great.  It was comfy, stable and tracked straight.  I have but one complaint.  Being of the sit-on-top variety of kayak, it comes with "scuppers," which are holes to drain water from the cockpit.  When I pulled a scupper plug to drain some water, the effect was the opposite; water bubbled up through the hole into the kayak.  Maybe I had too much gear, or maybe I'm carrying a few too many extra pounds, but that scupper was located below water level.  Next time I'll bring a sponge for dewatering and all will be good.

As I type this, the first spring shower is gently washing winter's residue from my truck.  Warm weather and rain can melt ice in a hurry.  I'm sure lakes will be open across central Illinois by next weekend.  My quest to catch a fat prespawn bass continues.  The spawn will come in early May and the clock starts today.
Posted by Clif at 8:56 AM

Email ThisBlogThis!Share to TwitterShare to FacebookShare to Pinterest
Tags: Ice Out, Kayak Fishing