I am but an honest man with empty pockets

A couple interesting things happened tonight while I was on the Mackinaw River.  Firstly, I've always heard about you trouters fishing with a "dropper" nymph below a dry fly.  Tonight I put my own spin on things and had a bit of success; this little guy took a nymph suspended from a bass popper. 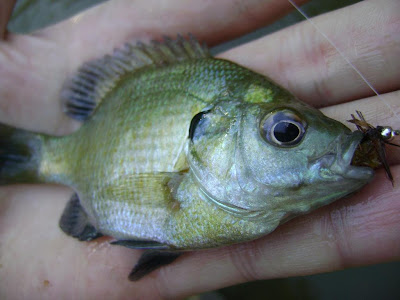 You may realize nymphing is a bit out of character for me but there is a simple explanation. I was wondering if I could repeat a recent performance, in which I caught a state record longear sunfish but didn't realize it until later.  In the front of my mind I was fishing for bass, but the back of my mind thought it would be nice to have that record.  Well the night wore on and the bass stayed quiet, but the #14 Adams proved to be the ticket.  Once again, I was holding a potential record fish but there was a slight problem. 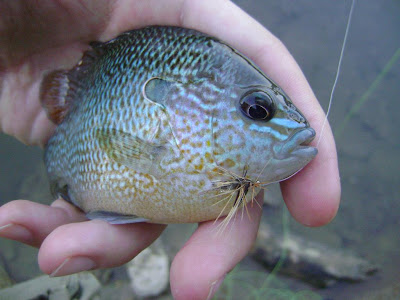 The little guy was foul hooked under the gill plate and therefore not something I wanted as my record.  I'm not even sure if it would be accepted.  I let him swim, but I'm on to something here and a record is just around the corner.  The quest continues!


If only there were some bass around to eat all these sunfish.
Posted by Clif at 9:39 PM