I'd like to start this one off by wishing myself a happy birthday, I've earned it after all.

As 2010 winds down, I've found myself with a vacation day surplus, which is an oddity.  We operate under a "use it or lose it" policy, so what better way to celebrate the big day than to make it a three day weekend?  A plan for the day formulated quickly; I decided to hit the Mackinaw and finally write my name in the Illinois record books with a record longear sunfish.

In a move reminiscent of drinking school college, I kicked off the long weekend with a Thursday fly tying session.  From experience, I know the longear sunfish like the Adams dry fly so I tied a few wingless versions to try as well.  I also whipped up a weighted few I thought the carp might like if I were so lucky as to find them where I left them.  This picture will also mark the beginning of the 2010-11 fly tying season - time to stock up! 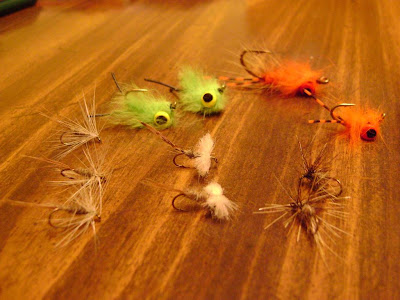 I started off the vay-cay-day by sleeping all the way until 7:00am and then taking my sweet time to eat breakfast, drink coffee, watch TV and load the truck.  By the time I made it out the door around 9:00, the mercury had finally crept up into the 40's but I packed a hoody - just in case.  What a terrible reminder about the beginning of the end, there is so much I have left to accomplish this year.

I made my way to the spot I think is the most likely hole to catch a longear.  Things started off cold and I was glad for the hoody - the wind blew, I couldn't bear being in the cool water and tying knots was difficult.  I resolved to not wade again this year without a minimum of thermal socks and flannel-lined jeans.  Eventually the air warmed up, but the fishing never did.  After trying the Adams, the spinner, a pencil popper, and a bass popper I finally struck pay dirt with a white and yellow woolly bugger. 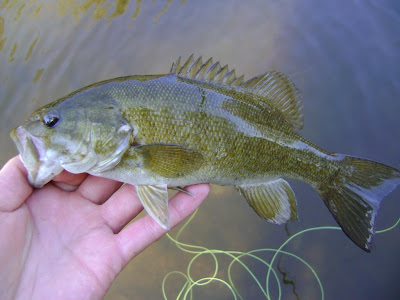 It is the nicest bronze I've managed in a long time and it felt good, but it was no longear and a tinge of disappoint was beginning to set in.  I fished a total of eight hours and tried about every fly I brought. I also missed a few takes...longears no doubt.

The quest will continue. We picked up some rain today and yesterday's 18cfs has almost doubled now...string a few of those together and there might be enough water to fully submerge a nymph.
Posted by Clif at 11:23 PM