Beak or Bill, Either Way it's Odd

I spied a fish, perhaps a small bass, cruising a deep hole known to hold fish. It's the kind of hole where the water darkens enough to hide the bottom and you know better than to attempt a crossing. These are the places fish congregate as the flow drops to August's trickle. My Clouser minnow cratered the surface, it was a perfect forty footer to the strike zone with a proper amount of splash. Two strips later and my fish spooked into the dark. An instant was all it took to feel disappointment, in the same instant I felt a tug from the beast that scared my target. 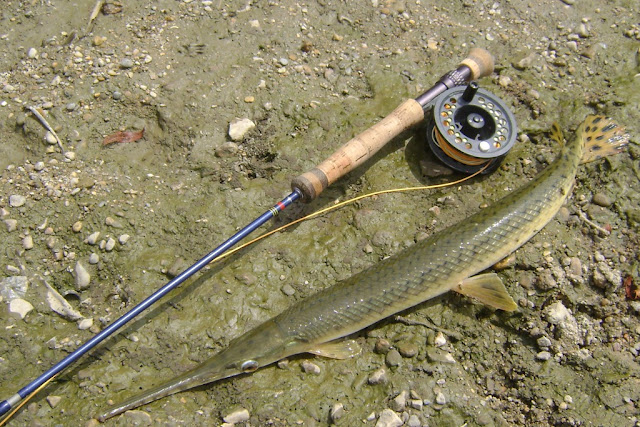 This section of river has always held a fair population of gar, most of them small and only a foot long. The recent addition of Asian carp may explain the recent explosion of larger gar. Usually it's an annoyance; you can hear them surfacing for air all around, and the uninitiated get excited about nonexistent topwater bass action. 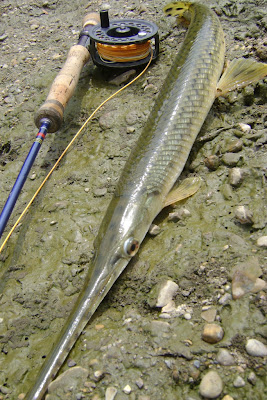 Nine times out of ten, when a gar takes a fly the fight is over quickly because the jay is bony and the teeth sharp. But sometimes it all goes right and you're left claiming victory over a dinosaur.

Gar fossils are known to exist from the Cretaceous period onward. Things haven't changed much in the last 65 million years and to behold such a fish leaves the angler with an odd combination of awe and disgust, perhaps with a tinge of the heeby-jeebies. Bowfin, Sturgeon and Gar like to get together on Saturdays to reminisce about the strange they nailed during the Paleogene period.

For a torpedo shaped fish, the fight is impressive and their strength is ridiculous - seemingly without end. Even on shore, the air breathing fish can wrestle with the best of them. Keeping a firm grip was my original strategy, but the proper handling of gar was one of the very first fishing lessons I learned. The larger specimens are stronger than me and their bodies are covered beak to tail with very sharp scales. These very scales were once used by Native Americans as arrow heads and one wiggle thrash will leave your hands bloodied. While still in college, I was bitten by a gar and received a small wound that would not heal. Two years later, I got boozed up dulled the pain and cut into the festering scar on my hand. After removing a gar tooth, my wound healed in a week. 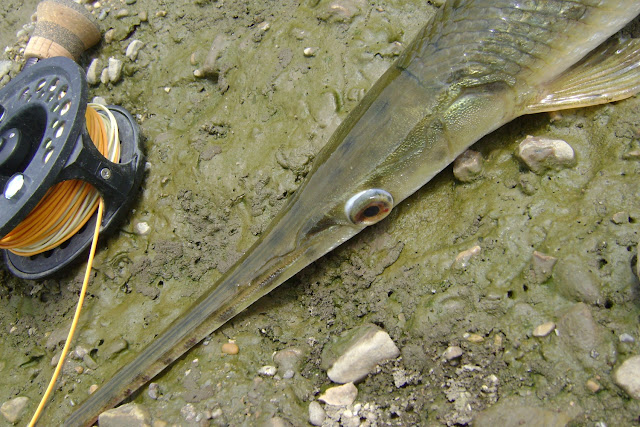 While leather gloves may save your hands, the best strategy is to not handle the fish at all. Saturday wasn't my first rodeo, so I dragged the dinosaur onto the beach and removed the hook. Luckily it was poorly hooked and this fish avoided additional leverage provided by boot. After posing for a few pictures, the fish had enough strength to flop itself across ten feet of beach and swim away. 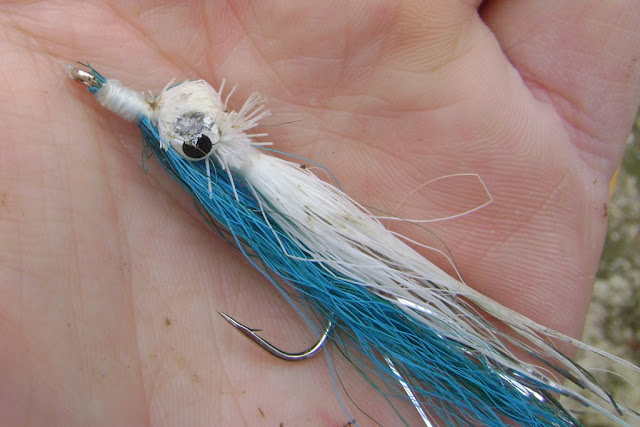 There are plenty of Asian carp babies to eat and I wish him the best. He owes me a couple flies though.
Posted by Clif at 6:00 AM