Surprise! It's a Musky!

My soon to be father in law and I went to Snakeden Hollow to try and catch some bass and crappy. I was fishing a 5" plastic worm up near the shore among some standing timber. I threw the lure within a couple inches of a fallen log and saw a fish break the surface immediately. I didn't feel a thing on the line, so I left the bait where it fell for a second. Then I gave the line a tap to shake the lure and the fight was on. I yelled that we needed to get the boat over there (we had two anchors down) because there were 4-5 trees between me and the boat and I knew this was big. While he was pulling up the second anchor, I saw the flash of the fish and yelled "it's a musky" and watched the fish swim 1.5 times around a tree. My heart dropped, I thought it was over. We pulled the boat over to the tree and I put my pole around the tree to unwrap the line and the fight was on again. When I got the fish close enough, my father in law netted it. He lifted the net and the fish was heavy enough to fall right out the bottom of the net. The fight was on again, this time with a net around the line. We finally got the 37" 11lb musky in the boat. The funny part was the night before I decided to respool my line and the only thing I had handy was 20lb test braided line. Normally I fish 10lb mono filament, but luckily I spooled up with what I had and it held up to some serious abuse. 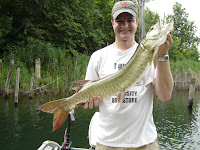 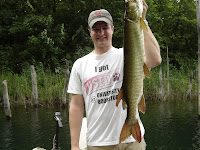 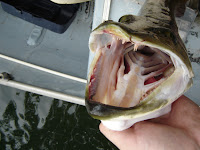 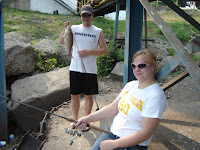