Some guys from work spent a long weekend at Lake Delavan, Wisconsin. We took two boats and got on the water Thursday night and packed it in Monday afternoon. Overall we caught a bunch of fish; a lot of bass, a few small pike, one 4lb catfish, and a dinner's worth of crappie and blue gill. We didn't catch a lot of monsters, but the action was steady the entire time which always makes it fun. Monday morning the algae cutting/mowing machines were out clearing the cover off the lake and the bite slowed.


Sadly, the good ship Clif didn't make the trip. But we had two fine boats: 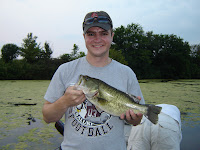 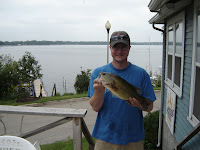 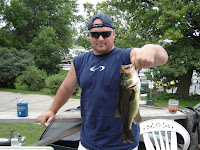 This guy's best crappie so far. It doesn't look that big, but he's a big man: 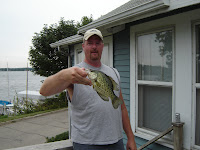 He has big hands:

Other events included a Brewers game, poker and botchy ball. We had a few frosty brews too. 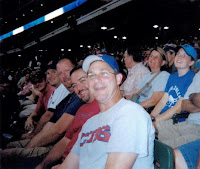 Posing for one final picture after the boats were out and the bags were packed: 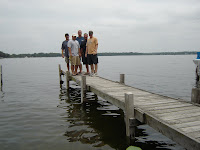 We decided the event would have to become an annual event named the "Toothless Beaver" fishing trip after the radio call sign of one of the two boats. T-shirts are on the way.
Posted by Clif at 8:13 PM No comments: