I know this is a fishing blog, however it's the winter time and I'm not man enough to be an ice fisherman. Plus, I know most people who would be interested in my fishing pictures (mostly friends) would also be interested in hunting.

During the annual trip to Missouri to celebrate Christmas with my extended family, my uncle set up a pheasant shooting trip at Moser's Pheasant Creek near New Franklin Missouri. This is something we did two years ago and would have done last year if it wasn't for a spectacular rain shower the morning of. Notice I called it "pheasant shooting" instead of "pheasant hunting." As these are pen raised birds they put in the field especially for you, it is the consensus of my family this is not hunting. However, the only difference between this and wild birds is that we were guaranteed to find birds (at least 75% of what we paid for according to Moser's rules), and they might be a little slower to flush. Although the later point didn't seem to apply to this trip as the weather was unseasonably warm and the dog had a lot of trouble with running birds.
The dog was a Vizsla named Abigail, which the outfitters provided along with a guide for a fee. She was a fine dog who did her best with the wind and warm temperatures. She ended up pointing 19 out of the 20 birds we bought; of those 19 we were able to bring down 17.

Enough chit-chat, here are the pictures. Next time I'm going to make sure and get action shots. 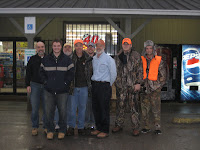 Before the outing, we met up at Snoddy's Store just outside of Boonville, MO. The thing that cracks me up about this picture is how we all prepared for a day of shooting. We have everything from the guys in full camo to my uncle in the middle who showed up in slacks and a button down shirt 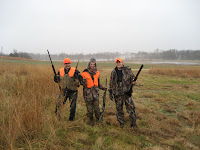 This is a picture of myself, my cousin and his sister's boyfriend. I'm holding up a bird I just shot, my cousin is holding it's leg. In the heat of the moment, it's hard to do a three count before shooting. 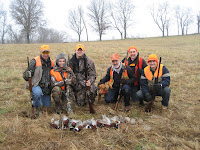 The group and the take. The interesting thing about this picture is when we lined up the birds and gathered around, Abi the dog knew exactly where to go and what to do. Seems you can train a dog to do more than just holding a point and retrieving.


According to their website, Moser's Pheasant Creek is a 500 acre habitat specifically designed for pheasant hunting. The also have 120 acres of newly developed wetland where they offer mallard duck hunting. The Missouri laws governing outfitters who offer duck hunting are apparently tricky, just ask the owners Mike and Bonny about it. We did and there was plenty to talk about for the next half hour.
Posted by Clif at 4:48 PM No comments:

Email ThisBlogThis!Share to TwitterShare to FacebookShare to Pinterest
Tags: Hunting, Not Fishing

March is fast approaching, and I woke up this cold Sunday morning with fishing on the mind. It didn't help when I watched a couple bassing shows while I drank my coffee. As most experienced anglers know, March is a good time in central Illinois to hook into the footballs out there. While the overall quantity is low, the quality and size of fish caught in the spring are much better than the rest of the year. The consensus is that jig and pig is the best way to coax lunkers out of their cold water stupor, but I've never had much luck at all in the early spring. This is the year I change that, so I decided to start with some research. I Googled "Jig and Pig" and opened up the first link.

Its a very informative article about jig fishing. Starts out with knowing how to select or make a jig for your cover type. Finally it gives some tips for where to fish and how to set the hook. Overall, it was a very informative, if long, read. Read up, you will be expect to have mastered this technique while on my boat. Make sure to check the bottom of the page for more articles. Personally after reading all that, I wasn't interested in reading any of the additional links. But I put this link here for us to go back and read them at our leisure.

I got an interesting e-mail today. It gave some tips on how to fish a Slug-Go. My father-in-law sent it to me because he's seen my Slug-Go collection. I got to thinking about what other useful techiques I could find for my favorite lures. Of course, getting anglers to give up their secrets is tough, so most of what I found are more like advertisements but here's some finesse fishing tips for my favorite lures. Most of it isn't news to me, but for someone just starting out it could save a lot of frustration.

Just a few more weeks until the ice melts and Central Illinois anglers will have their best chance to hook into a lunker. I'm getting excited.
Posted by Clif at 9:59 PM No comments: