I've found a few pictures from a trip to the "Lacon Pits" back in 2003, if I'm motivated I'll post the rest. Maybe it will give me something to do this winter, in the mean time this is it.... 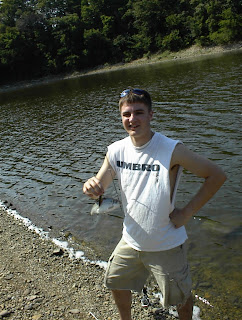 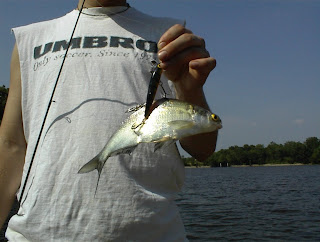 Email ThisBlogThis!Share to TwitterShare to FacebookShare to Pinterest
Tags: Shad

As some of you may know I first started fishing in earnest while still in high school. What some of you may not know is that the Illinois High School Association (IHSA) will begin offering competitive bass fishing to highschoolers throughout the state in 2009. This is awesome and while I wish such an option had been available for me, I'm excited for all kids who have the opportunity now to learn about the sport and how important conservation is.

It sounds like there will be a typical sectional/state tournament to narrow the field down to the state champion school. The details (such as sectional dates and locations) on how this will work are still a little sketchy, but they do know the season will end at Carlyle Lake on May 8-9, 2009. The official rulebook is here, but like I said they're a little sketchy. I imagine schools will begin holding smaller tournaments as a sort of unofficial regular season. In fact, what may be the first such tourney was won by Batavia on Oct 19th out on Lake Shabbona.

On November 5th, the list of schools who will be participating in the 2009 state tourney was announced. 214 schools signed up! I find that number amazing, and I'm really happy to this because it means there is a strong interest in fishing throughout the state. I see IVC on the list...GO GHOSTS!

The official rules indicate all schools will participate in a single class tourney for the championship... maybe as participation grows over the years this will change to even the playing field. While smaller rural schools probably have a higher percentage of experienced anglers and it only takes two kids in a boat to win it all, money can make a huge difference in this sport. As the state tourney is in early May and all sectionals would need to happen before that, the bass will still be deep - so boats with sonar will probably do well. I hope it doesn't boil down to the richest schools fishing Lake Carlyle in fast boats with fancy equipment while the smaller schools watch from the shore. Maybe a date change to Sep/Oct would help boost the fish count and excitement but it wouldn't leave much time for a "regular season" of smaller outings.

All in all I'm excited to see out this works out. I expect some growing pains, but in a year or two it could really be something.

I woke up this morning to a beautiful forecast - mid seventies and sunny in November! Couple that with my bout of insomnia last night and I had all the motivation I needed to take a personal day. I started my day with a quick nap then headed out to Mineral Springs park again to see if there were any trout left. Apparently all the trout have been harvested, or more likely I'm still lacking that "something" with the fly rod. After 3 hours of nothing at the park, I packed it in and grabbed some lunch from the local Gas-Mart. After a fine lunch of Combos, I went to a lake where I hold a historically significant chance of catching fish: Banner Marsh.

I've been secretly dreaming of catching a monster as my first fish on the fly rod then writing about what an awesome experience it was. Instead I picked this puppy up about 6 inches from shore. I literally picked it up, when it bit I just lifted my rod (cane pole style) to land it. Anyway, the monkey is off my back and I can finally concentrate on catching nice fish instead of just concentrating on catching any fish.

Sorry, I didn't bring my scale - no measurements. 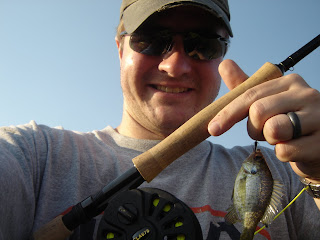 Side note: apparently repeatedly ripping a balsa wood popper through the brush behind me is a good way to find my pockets devoid of poppers. Time for a trip to the outdoor store.
Posted by Clif at 6:18 PM 2 comments: