Could this be the toilet's last flush?

Over one hundred years ago, the city of Chicago connected the Great Lakes to the Illinois River by reversing the flow of the Chicago River.  The move was aimed at draining sewage from Lake Michigan and therefore the city.  Chicago's move has spent some time in the halls of the Surpreme Court and has a history I admittedly don't fully understand.  Before you read this, I should also declare I do not fully understand the details of the connection between Lake Michigan and the mighty Mississippi

Now the US Supreme Court may soon be in a position to reverse the reversal because the state of Michigan has filed suit. The latest suit requests that the connection be permanently severed in order to keep those pesky asian carp out of Lake Michigan.  Ever since the great rainy season of 1993, asian carp have been slowly making their way to Lake Michigan, and recent DNA testing indicates the carp have already found their way past electric barrier and are potentially already in the lake.

There is a lot of interesting information provided in the link above.  One thing that caught my attention is the legal limit on the amount of water allowed to flow from Lake Michigan via the Illinois River basin; currently set at 2.1 billion gallons per day.  I've read about half of that is sent downstream while the other half is absorbed as drinking water.  According to Waterwatch, over the past ten years the Illinois River has averaged about 9.8 billion gallons per day at a measurement station close to my home.  1 billion gallons represents 10% (or so) of that daily average and I think that is significant.  Further upstream the impact will be larger (16% for those of you in Marseilles).

So....IF the Chicago River is actually draining at the maximum of 2.1 billion gallons per day and IF the resolution is to shut off the faucet, it leaves me with some questions.  Where is all that water going to go?  What environmental and societal impact would a 10-15% reduction in flow cause to those of us downstream?  Is Chicago still draining sewage (surely it's treated now) down the Chicago River, and if so, where will the sewage go?  Hopefully questions such as these are considered before a decision is made.

I'm not yet sure how I stand on this...one could argue such a decision would simply be reverting the waters to their natural states; something I would normally support.  However, one hundred years of industrial progress can't be ignored.  In fact, the basis of the suit is to protect a $7 billion fishing industry that was not present 100 years ago.

Maybe Asian carp represent a potential to build that commercial fishing industry up to $10billion...they are fish after all.  And maybe this is a chance for the Illinois River to ditch it's nickname of "Chicago's Toilet."  Snagging fewer condoms would be a bright side of lower flow, but I'll have to forget about Simon's Durex Streamers.
Posted by Clif at 9:49 PM No comments:

I need one of these dogs.

As of press time for this post, Lunkerhunt has 25 "followers."
Of the 25:
- 2 follow everything they can, in hopes of promoting their own - don't click on them.
- 3 are readers who don't keep a blog (my lovely wife is one)
- The rest maintain a fishing/outdoors blog.

The other regulars who don't "follow" are also fellow bloggers. I guess that means I have a good handle on my target audience.
Posted by Clif at 6:22 PM 2 comments:

Sacrifice the few to save the whole 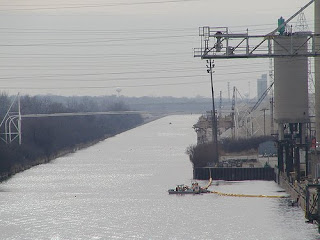 Photo Courtesy of Dale Bowman at the Chicago Sun Times

The Army Corp of Engineers' fish kill on a 6 mile stretch of the Chicago Sanitary and Ship Canal began last night and is underway now.  If you remember my previous post, they are killing all fish in the zone to allow time for repairing an electric fence.  The fence is designed to protect the Great Lakes from the Asian carp invasion, and while it is down the poison should take care of the lakes.  Protecting the lakes from Asian carp will protect will $7 billion per year fishing industry.  I believe this to be a noble cause, but will ultimately prove insufficient.

Apparently, fish are floating but no Asian carp yet seen in poison zone.

It seems Illinois is fairly well represented in the fishing blogosphere.  Here are the Illinois based blogs with focus on fishing and fishing accessories.

I'm sure I've missed some, and I'm sure I'll hear about it.  So for a complete list, please see the comments section below.

Catch Photo Release Fishing - Bill is based in the South Burbs (I think) and takes pictures of everything.  This blog isn't about catching fish, it's about the fishing experience.

flowing waters - Wolfy is based in the Fox Valley (western burbs) and keeps a good blog.  I'm pretty new to this one, so I'll let the link do the talking.


Stream Stalker - Jonn is based in central Illinois, but you'll find him anywhere with running water.  He's a guide who maintains one of the many quality blogs on Prairie State Outdoors.  Jonn specializes in pulling smallies out of streams and, like me, is new to fly fishing.

Nate's Fishing Blog - Peoria based with travel.  Nate runs a pond management company and enjoys fishing.  This combination ensures lots of behind-the-scenes fisheries management stuff you might not think of.

The Fair Weather Fisher - Dave's my fishing pal.  He doesn't post often but when he does it's pretty good.

Northern Illinois Angler - In yet another PSO blog, Andrew likes to fish Des Plaines River.  He also makes plenty of trips north of the border.

Scattershooting - Jeff is the outdoors writer for the Peoria Journal Star and mastermind behind PSO.  His blog covers all things outdoors and often covers angling.


Stray Casts - Dale Bowman is the outdoors writer for the Chicago Sun Times and keeps a stellar blog. This blog is also devoted to the outdoors and often covers angling.
Posted by Clif at 9:06 PM 3 comments:

Check out this giveaway from fellow a fellow blogger.
Posted by Clif at 11:43 AM 2 comments: