I recently got on a hot streak and won two blog contests - in a row. First I won Owl's Free Flies, Yes Really contest.  How and why? I'm not sure.  Two days later I won Cofisher's Trivial Pursuit contest, apparently because I'm better at Googling than all his other readers...well except one.  Unfortunately the state lottery commission failed to get the message. 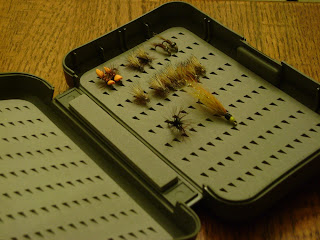 Both prizes arrived yesterday at the exact same time, and I must say they match splendidly. Owl sent the flies and Cofisher sent the fly box.  The fly box came as advertised, but the there must have been a mix up with the flies.  Owl promised "a baker's dozen."  I've heard that phrase used to describe a couple different quantities, usually thirteen. Not once have I heard it used to describe fifteen of something.  Fifteen tiny little flies, I would tell you about them but to me they look like just that: tiny little flies.  Maybe Owl will chime in and tell me what they are called, otherwise just look at the picture.

I'll leave you to speculate about which is Silent Bob.
Posted by Clif at 9:22 AM