The Key To Me: Words

It is Friday night again and here you are, don't pretend you have anything better going on. 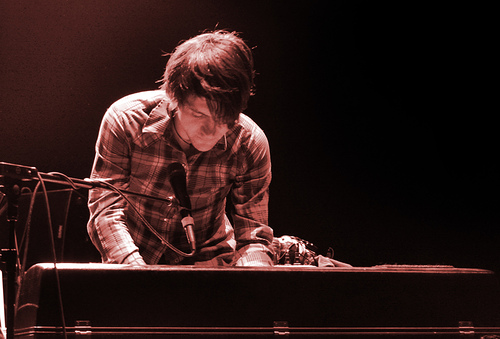 Here is a great song that really turned me onto Conner Oberst and his band called Bright Eyes. The song is beautiful and the video may bring tears to your eyes. Grab your honey and head phones, check it out...

If you liked that (I'm sure you did), smash the play button on these other songs by Bright Eyes, I promise these are less mushy but no less poetic: 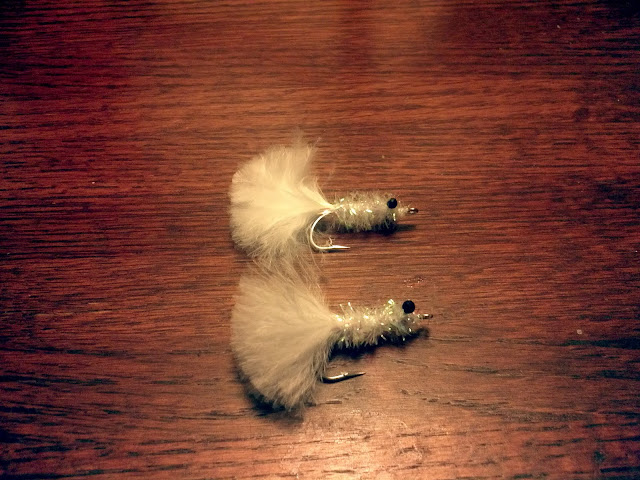 While in Florida last week, I visited Norm Zeigler's Fly Shop. Norm says his Crystal Schminnow will catch bass as well as it catches snook. I'll find out tonight after work and let you know.

It is a super easy tie, five minutes max. Can you guess which fly shown came from his shop, and which one I tied last night?
Posted by Clif at 6:00 AM 6 comments:

G-Funk Step To This I Dare Ya

I have a couple fishing related posts rattling around the old noggin. Unfortunately for you, I had a busy week. I slept in three states, boarded four planes and drove fifteen hours - I can't bring myself to do any real writing. I don't even feel like fishing this weekend. *gasp*

Instead, here is the song that played on satellite radio as I pulled into the rental car lot to close out a long day. Some will turn up their nose in disgust. Others will have never heard such beauty. The rest of you...well the rest of you know what this is all about.  Happy Friday 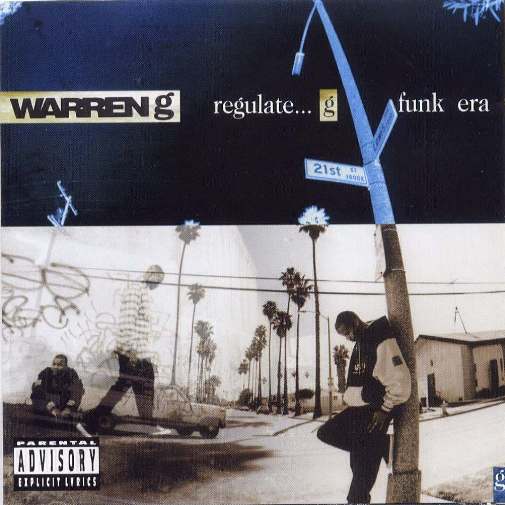 The Strangest Interview You Will See Today

I hadn't planned on five posts in five days, but I saw this last night and had to share....reporter catches duck during awkward interview.

I Say the First Rule is THAT Man Goes Last 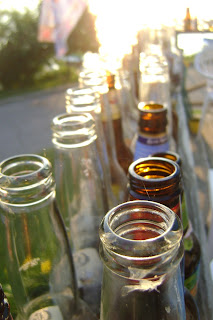 It seems we learn something every year. In the first year, we learned where they hide the boat ramp key. In year two we learned exactly how much ice is required to keep two kegs cold  (and outdoors) for a weekend. Hint: it takes a lot. During year three we Todd painfully discovered exactly how weak the dock was. Last year we were finally figuring out how to catch fish from Lake Delavan. And in this fifth anniversary year, we may have finally mastered the Toothless Beaver Adventure. The only near catastrophe involved a golf cart accident and a bruised noggin... nothing serious.

Consumption was up, driving was down, fishing was improved and instances of "food poisoning" held steady. Some may say the beer selection was a little heavy on Corona, but I think we were only doing our part to support the citrus trade...you know, during these difficult times US citizens have to pull together. To solidify our neighborliness with the folks of Florida, this years selection also featured a strong presence of Lightening Lemonade. My cans always emptied too fast and I've lodged a complaint with Mr. Jeremiah Weed himself. He has assured me the next batch should have fewer holes.

Somehow, and only very slightly, we got some fishing in. Bassin' was pretty much average, with a few fish in the two pound range on Powerworms and poppers...plus one much larger fish, but more on that later....

Instead of stuffing rubber worms down the throat of difficult fish, we actually paid attention to the lake and caught a bunch of bluegills. 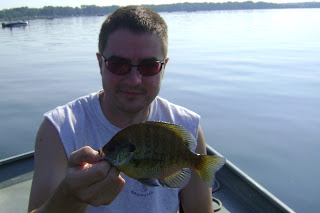 We found them hanging out in 10-12 feet of water near a weed line. Here they gobbled up night-crawlers indiscriminately for a couple hours at a time.


When the gills were eating, they were doing so with vigor. Every morning saw about two hours of strong action. The kind of action that makes you bored if nothing happens for thirty seconds. After a minute we'd check the worm, and usually need a replacement. As with most hot bites, it went dead as quick as a blink. Luckily this usually happened just in time for fried eggs and a breakfast beer. 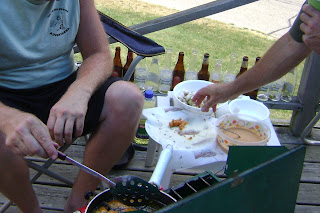 We held a couple "fillet fests" on the deck, and wound up with an undisclosed amount of bluegill meat. The quantity of fillets was sufficient to supply the crew with one lunch and take home many more. Somewhere in Illinois, a large family with big men ate well on fresh caught fish.

A good fish fry was the key ingredient we've always missed. Fish with deep fried onions, mushrooms and pickles was the perfect combination to fill our stomachs and the toilet...in that order. Even Tom admitted it tasted good and took his turn on a pot. 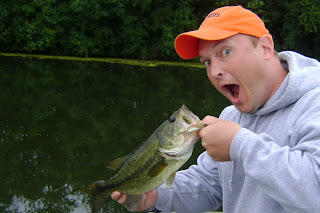 As I mentioned, the bass bite was slow, but it wasn't totally dead. While my boat focused mostly on the gills, Scott's boat the S.S. Smelly Muskrat was in the slop seeking largemouth.

The mornings saw a decent topwater bass bite near the spillway and a few fish were taken there with poppers. As the surface action subsided, rubber worms and spinners were key. This method took a few fish in the shallows and a few more fish in 10-12 foot of water. I don't believe any fish were taken on crankbaits, but I can't be entirely sure. 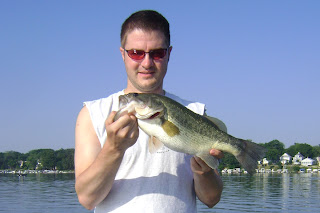 Once again, I took top honors in the big bass competition. Certainly, my esteemed readers would expect nothing less. Maybe next year I'll convince everyone to actually bet money.

Friday, while watching my bobber bob, boredom struck and I cast a ten inch Powerworm to the bottom. A couple ticks later and the four pounder shown at right was pulling drag. T'weren't as big as the five pound bass from last year, but a good fish is a good fish and it was plenty big to get the juices pumping. Four pound bass don't touch my hand as often as I'd like.

The highlight of the trip was spending time with the neighbor, Doug, on our final night. He is one of six locals who spends 365 days at the lake. Doug lived an exciting life full of bar fights, rodeo and women. Finally settling down with Dawn on the lake fifteen years ago was the end of his craziness, but the guy still lives the dream. 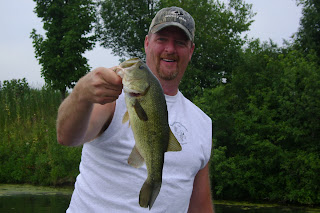 We cranked some old-timey twang on his jukebox, sipped beers and listened to the stories. He was especially glad to have a sounding board for complaints about the Chicago [expletive redacted] who overrun his paradise every weekend. We never mustered the courage to tell him we're not exactly "country folk like him," but we sympathized about the $800 fine levied by the homeowners' association for his propensity to trim trees.

As a whole, this year was pretty mellow. Maybe we're getting old or maybe we've finally learned to lay off anything served in a shot glass. Either way, the trip is getting legs and starting to run. With fun like this, we may have to consider two trips per year. 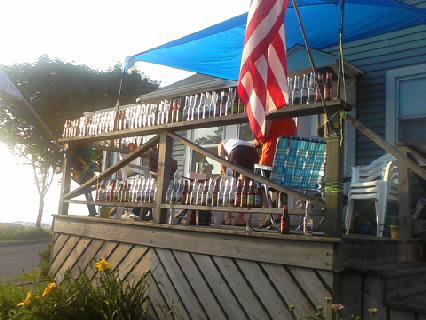 Stay tuned, we've already discussed some improvements for later this year next year.
Posted by Clif at 6:00 AM 2 comments: 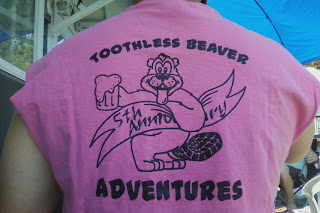 TBA 2011 is in the books and with it came a new member. We introduced "Mel" to the world of Toothless Beavers.

As a life long friend and old fishing buddy of charter member Tom, Mel's sudden inclusion wasn't questioned too much. We met him once before the trip and he demonstrated a keen ability to hold booze...a key characteristic for TBA members. A quick huddle and his place as probationary member was fixed, but probationary members must bear the mark. Something to attract attention and warn passersby of a drunk, and potentially dangerous, beaver.

He wore his pink shirt with pride and we're thinking next year he'll graduate to full-fledged member. The benefits of such a distinguishment aren't really clear, but I'm sure it is totally awesome. No promises though, the committee still has to discuss "the incident."  Mel, we'll be in touch. 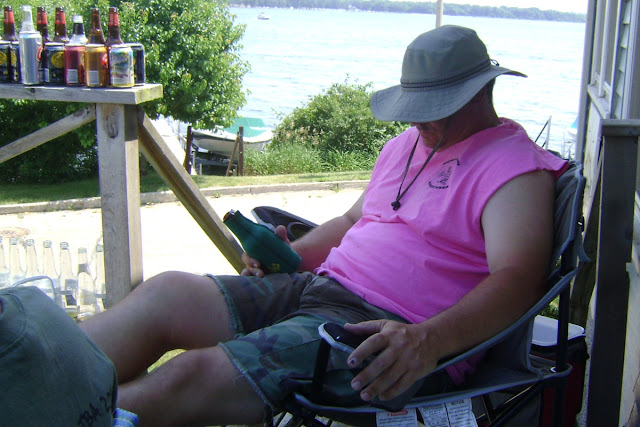 The funny thing about fishing with a blogger is that you never know when he'll take a picture. Whatever you do, don't compose a shot like this and act surprised when you see it on-line....

Email ThisBlogThis!Share to TwitterShare to FacebookShare to Pinterest
Tags: Behind the Scenes, Foolish Behavior

He Loved It Hard

Brady came in from Denver and wanted to catch ugly green fish. I did the best I could... 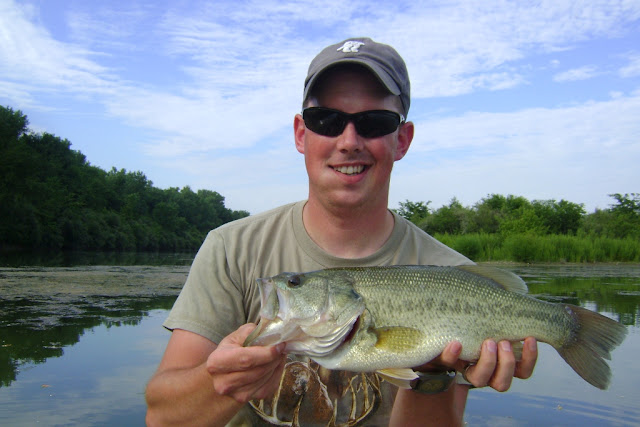 "Sure am glad I'm fishing with you. I don't want to be one of those trout snobs." A sentence I suspect was filled with half truths and back-handedness. I took it as a compliment nonetheless. 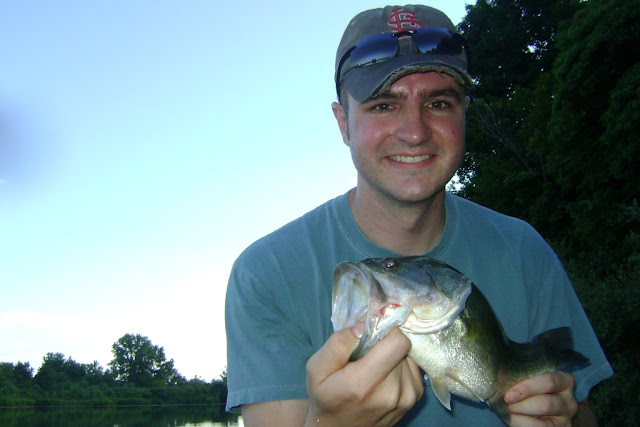 Brady felt "the baby heart attack" of bass sipping exploding on dries frogs and he loved it. He loved it hard. He might even come with me again or, God forbid, seek bass in Colorado with the tips I gave. 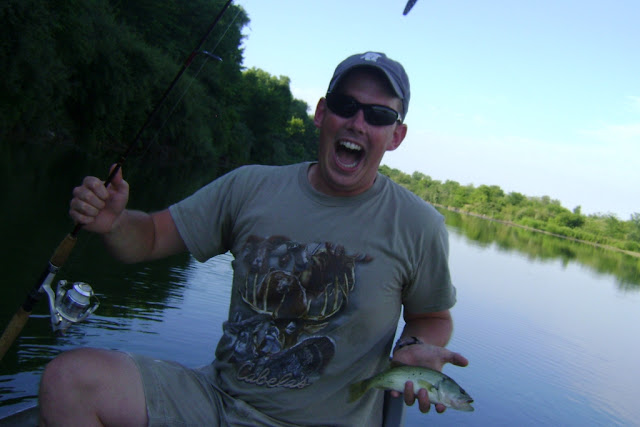 Trips like these make me think about guiding, but I remember I'm not real good at this whole fishing thing - I just get lucky sometimes. I have very little patience for stupid people and I hate giving up good spots. I make exceptions for good friends. 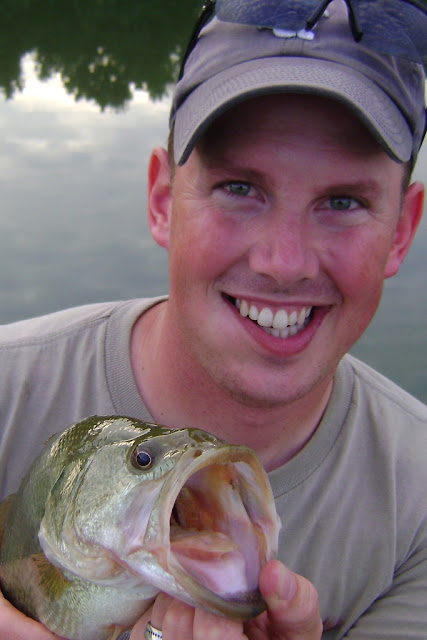 Last year on the final night, vision blurred and the clock ticked hard. We had finally exposed a crack in the mystery of the lake and had two hours to blow it wide open. I'm told I screamed like a little girl when I lay hands on my best bass ever...I contend no one can remember the moment clearly. Pictures represent the only solid evidence:

I came home and restocked the armory, successful pattern intact. Not just the successful pattern, but the hook, worm and weight. There she sat all year long - mostly because I avoid bait casters like the plague. Tomorrow I will pull that ten inch worm from the keep and dip her in the spot she last swam...maybe even tempt the same fish. 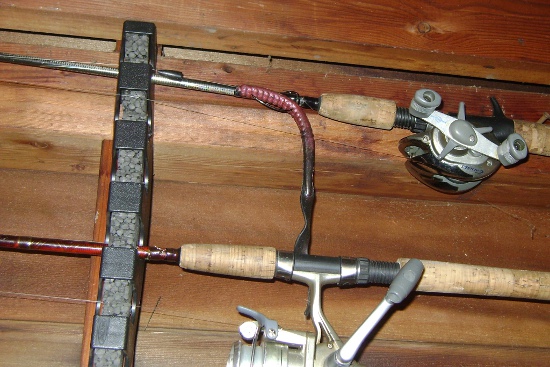 Ten inch worms go with big bass like beer goes with fishing. A match made in heaven to not be tampered with. This will be my last post until the fifth annual Toothless Beaver Adventure is in the books. I've dubbed this year's trip: "TBA 2011 - The Year of the Bar Fight."
Posted by Clif at 6:00 AM 5 comments:

Email ThisBlogThis!Share to TwitterShare to FacebookShare to Pinterest
Tags: Behind the Scenes, Toothless Beaver Fishing

Do You Hear an Angel?

Happy Independence Day to all my US based readers. For the rest of you? Well...happy July 4th. Here is some kick ass music to get things started. Listen to each one, the only commonality is the band that rocks them.

Quick note to say my Glacier fishing gloves have found a higher purpose.... 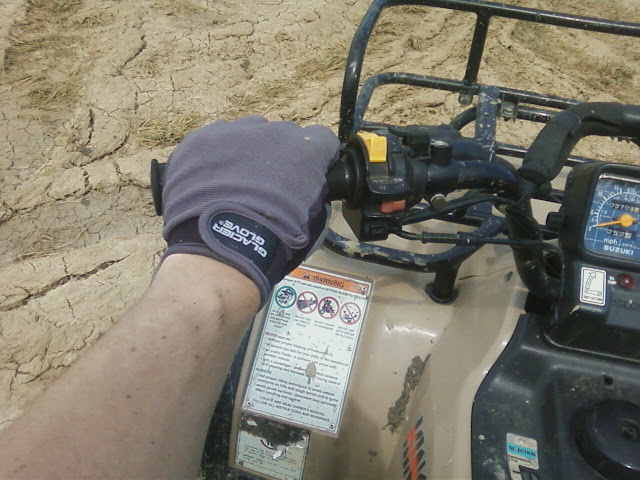 This has been a pretty good weekend so far, but wait until you see what I have planned for the week.
Posted by Clif at 6:40 PM No comments:

Email ThisBlogThis!Share to TwitterShare to FacebookShare to Pinterest
Tags: Gear

Kayak Angling - The Good and the Bad

So you want to be a kayak angler, there are somethings you should know... 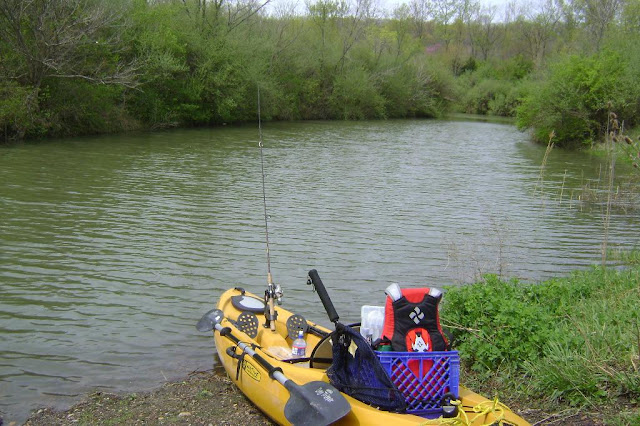