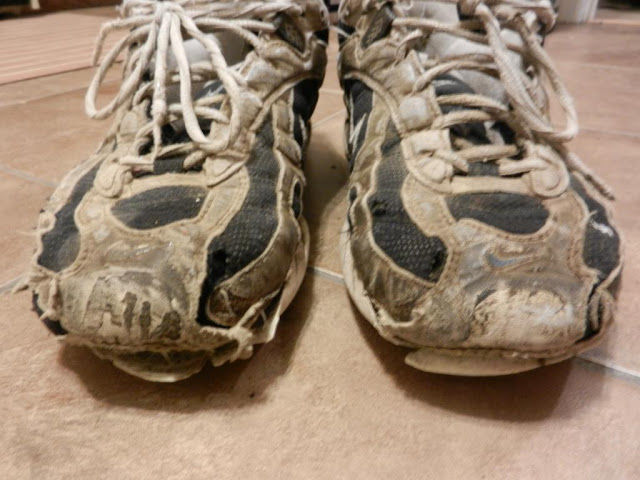 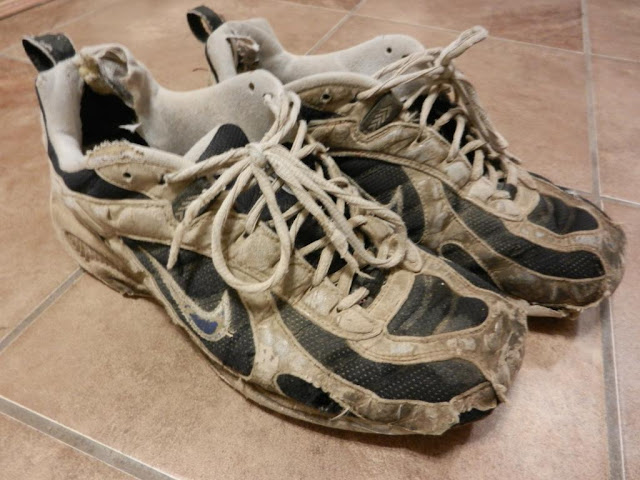 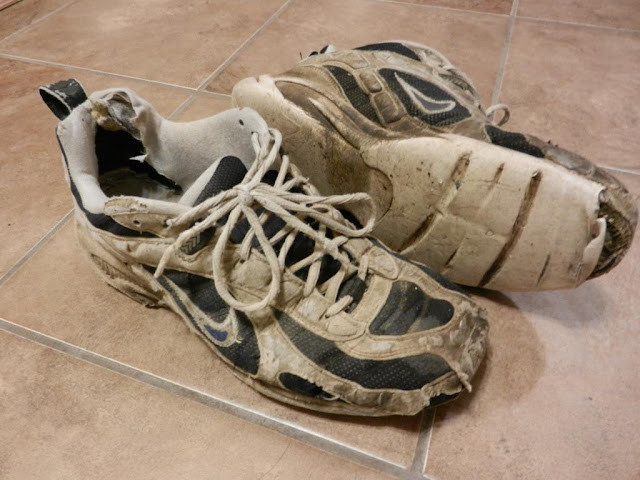 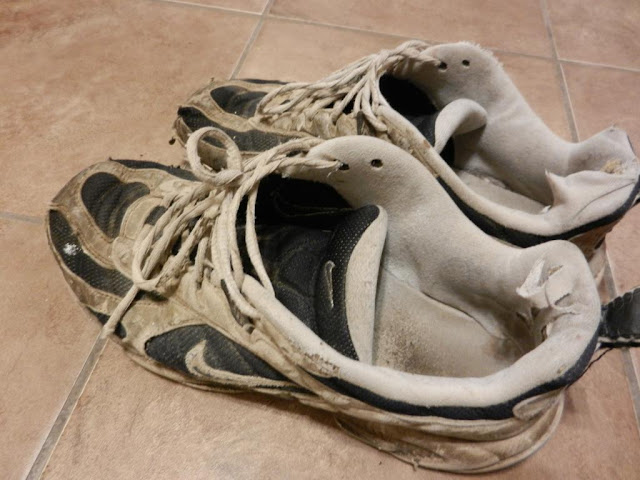 Email ThisBlogThis!Share to TwitterShare to FacebookShare to Pinterest
Tags: Behind the Scenes, Not Fishing

A dude named Wayne shot me an e-mail recently. He was building a sunfish identification quiz and was interested in using some pictures of mine. After I saw his work I got excited about being included in such a project and granted immediate permission. Click here to take the sunfish quiz, it ain't easy but you'll learn a couple things...and no, I will not tell you how poorly I scored. 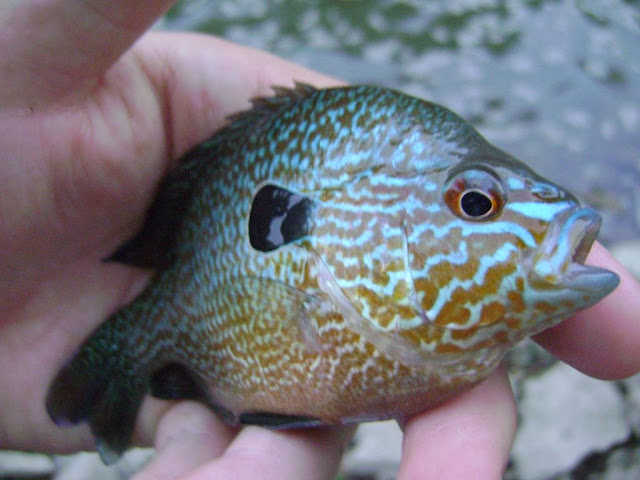 Next he needs to build a quiz to help me keep remember how to ID stripers, whites and "wipers."
Posted by Clif at 7:49 PM 8 comments: 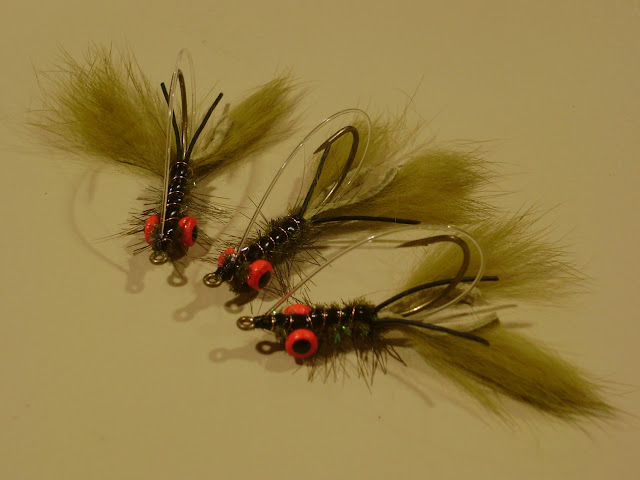 If you're handy with a vise, click here for video tying instructions.
Posted by Clif at 6:01 AM 9 comments: 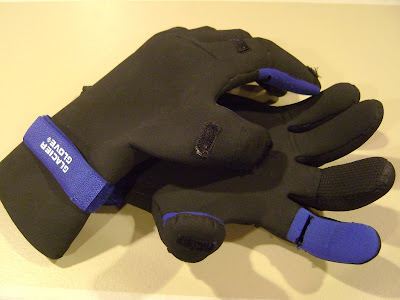 Someone at Glacier Glove was paying attention when I said summer gloves "are not my bag." With winter approaching, they came back with a new opportunity: Pro Angler Gloves. I told them another review would be great but I couldn't promise any fishing with the gloves - ice fishing isn't my bag either. There is no shortage of other outside type stuff going on around here in the winter... namely my second passion: shoveling snow. For some reason they found that agreeable.

Little did we know how mild our December would be and getting this review complete took a little longer than expected. The gloves arrived on December 14th. It was a freakishly warm day at 54 degrees - foreshadowing perhaps? Cold weather trials would have to wait..maybe it would snow and I'd have the review done by Christmas?

First impressions were favorable and no initial quality issues were evident. These gloves had enough features to make me think they are worth the hefty price of $40. They are constructed of fleece lined 2mm neoprene, they call it G-Tek... whatever the heck that means.

A Velcro strap at the wrist would keep the gloves in place. Slits in the thumb and index finger allow those fingers to be liberated in situations such as knot tying, picture taking, txt messaging or nose picking. Small patches of Velcro secure the finger flaps out of the way. The middle finger has a nice textured patch for traction. I slid the gloves on, they fit loosely but not too bad. Perhaps I should have checked out the glove sizing chart before ordering size large.

Most of the glove is water proof, with the obvious exception of thumb and index finger. Having previously fished with 100% waterproof neoprene gloves I was anxious to know if water intrusion would compromise the insulating properties of these gloves, better get out and try it...

I took my fly rod and these gloves to Powerton on a day that happened to stay below freezing. I started fishing without any gloves just to verify that it was in fact cold outside...and it was. I only lasted a few minutes before reaching in my pocket for the gloves - the warmth was just about instant. Stripping wet line across my right index finger put a noticeable amount of moisture into the glove 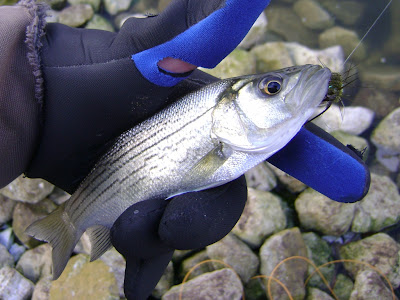 but everything stayed warm. Very warm to be exact, and that is a HUGE plus for these gloves. I think they are even warmer than my other neoprene gloves...water and all. That will outweigh any potential issues.

The fly fishing trip did reveal a couple weak spots for the gloves...at least for me. Apparently, I use my middle finger while tying improve cinch knots... something I didn't realize until this trip. 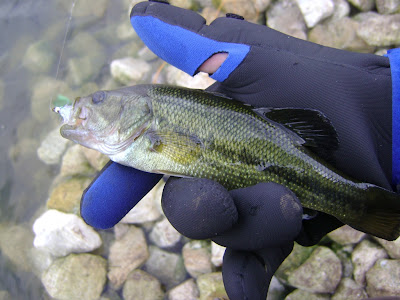 I also ran into a slight quality problem while fishing. A thread came loose inside the right hand index finger, and stripping line also pulled the thread out farther. I snipped the thread at the root and the problem disappeared, but my gloves are missing about twelve inches of thread from somewhere...I think it came from the fleece lining near the finger slit.

I came home and threw the gloves on a shelf in my garage and three days later grabbed them to fish again. They were still wet on the inside and cold when I put them on. It only took a few minutes to warm the moisture and be comfortable again. Storing the gloves indoors helps to dry them out more quickly. 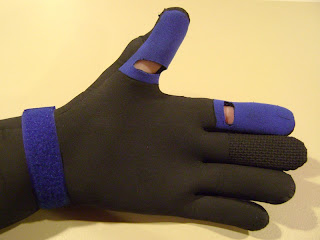 On New Year's Eve, I took the gloves hunting on Grandpa's farm in Missouri. The weather was so warm, maxing out at sixty-eight degrees, I never even took the gloves out of my pocket. I had another chance to hunt the following weekend.

I brought the gloves and Granddad's shotgun to Banner Marsh to try and find some upland game. The day started cool and Glacier's gloves were a great addition.

I was hoping the gloves wouldn't interfere with my trigger finger, and unfortunately that wasn't the case. With this particular gun I could not fit my finger into the trigger guard. 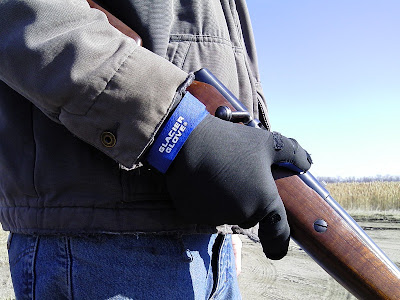 I think all guards are unique so you may not have this problem with a different gun. I peeled back the flap on my trigger finger and secured it on the Velcro. I prefer my trigger finger to be bare anyway so this was great, but it revealed another minor design flaw.

The Velcro patch used to secure the fingers when they are folded back works pretty well as long as you don't move your hand much. While hunting, it didn't take long for the flap to get loose and... well... flap around. It really wasn't a big deal functionally, but the Velcro didn't fulfill it's duty for extended periods of time. The Glacier team could improve this area - potentially by using larger Velcro patches.

As a whole, I am very pleased with Glacier's Pro Angler Gloves. Keeping wet hands warm while fishing is a huge challenge to overcome. While fishing, my hands were warm... not "warm enough" but actually warm. I did have a few minor issues but nothing severe enough to make me forget how warm they are. I'm definitely going to use the gloves again for future fishing and hunting trips. Maybe someday we'll even get some snow to shovel.

I'm sure you'll be happy with a pair.


Disclaimer: The Glacier Gloves featured in this post were provided to me free of charge in exchange for an honest review. I am not an expert on fishing gloves, or any sort of glove for that matter, and such a position allowed me to provide this review from the perspective of an outsider to the fishing glove industry. Lunker Hunt is not officially associated with or sponsored by Glacier Gloves and is accepting no other compensation, monetary or otherwise, in exchange for this review. My independent status may change in the future but, as of the date of publication, no relationship other than described above has been pursued or established. This disclaimer is getting pretty long, huh? Maybe I should just stop typing it.

Bonus section for those still reading: You'll quickly learn where to NOT wipe your runny nose on these gloves. The Velcro patches leave a small but painful mark when repeatedly rubbed on cold tender nose skin.

A bluefin tuna recently sold for $736,000 in Japan. The fish weighed 594lb (field dressed I suppose) and will result in a $90 loss for every sushi roll sold. Those Japanese are crazier than we thought. 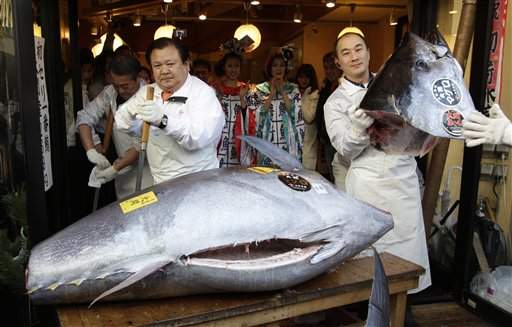 At $1,238 per pound, I'm beginning to rethink my preference for fresh water fishing - sustainability be damned.
Posted by Clif at 7:12 PM 4 comments:

This One Is For Ivan

I don't care what they say about Missoula and its residents. Anyone who makes delicious canned beer like this is "A-number-one" in my book. 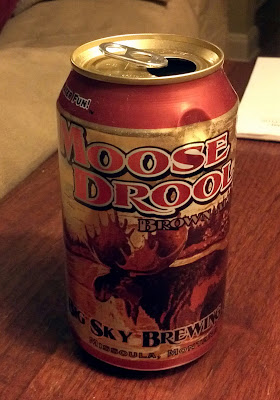 I couldn't resist...it even says "We Make Water Fun!" Perfect for any Missoulian who is also a Fluvialist and enjoys canned beer.
Posted by Clif at 8:19 PM 6 comments: